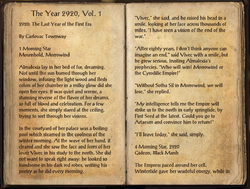 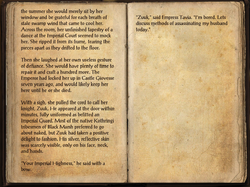 Almalexia lay in her bed of fur, dreaming. Not until the sun burned through her window, infusing the light wood and flesh colors of her chamber in a milky glow did she open her eyes. It was quiet and serene, a stunning reverse of the flavor of her dreams, so full of blood and celebration. For a few moments, she simply stared at the ceiling, trying to sort through her visions.

In the courtyard of her palace was a boiling pool which steamed in the coolness of the winter morning. At the wave of her hand, it cleared and she saw the face and form of her lover Vivec in his study to the north. She did not want to speak right away: he looked so handsome in his dark red robes, writing his poetry as he did every morning.

"Vivec," she said, and he raised his head in a smile, looking at her face across thousands of miles. "I have seen a vision of the end of the war."

"After eighty years, I don't think anyone can imagine an end," said Vivec with a smile, but he grew serious, trusting Almalexia's prophecies. "Who will win? Morrowind or the Cyrodilic Empire?"

"Without Sotha Sil in Morrowind, we will lose," she replied.

"My intelligence tells me the Empire will strike us to the north in early springtide, by First Seed at the latest. Could you go to Artaeum and convince him to return?"

The Empress paced around her cell. Wintertide gave her wasteful energy, while in the summer she would merely sit by her window and be grateful for each breath of stale swamp wind that came to cool her. Across the room, her unfinished tapestry of a dance at the Imperial Court seemed to mock her. She ripped it from its frame, tearing the pieces apart as they drifted to the floor.

Then she laughed at her own useless gesture of defiance. She would have plenty of time to repair it and craft a hundred more. The Emperor had locked her up in Castle Giovesse seven years ago, and would likely keep her here until he or she died.

With a sigh, she pulled the cord to call her knight, Zuuk. He appeared at the door within minutes, fully uniformed as befitted an Imperial Guard. Most of the native Kothringi tribesmen of Black Marsh preferred to go about naked, but Zuuk had taken a positive delight to fashion. His silver, reflective skin was scarcely visible, only on his face, neck, and hands.

"Your Imperial Highness," he said with a bow.