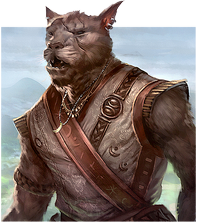 The Khajiit are the race of feline humanoids who originate from Elsweyr and one of the three races representing the Aldmeri Dominion. There are eight sub-species of bipedal Khajiit: The Suthay, the Ohmes, the Cathay, the Tojay, and the raht(larger) version of each of those 4.