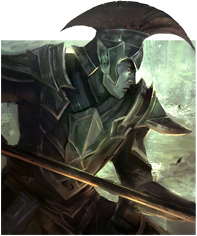 The Dunmer, Chimer (changed ones), or Dark Elves, are one of the three races representing the Ebonheart Pact. Their homeland is Morrowind.

The appearance of the Dunmer race is similar to that of other elves but the Dunmer are characterized by their red eyes and dark skin. That’s why they are called Dark Elves. If you see an elf with red eyes, it is a Dunmer. They are rather tall: taller than the Bosmer but shorter than the Altmer.

They are very strong, quick and have incredible intellect. Such a combination of talents allows them to be good warriors or sorcerers. They like melee, hand-to-hand combat, and the art of magic. Many talented warriors and mages can be found among the Dunmer. They are also good assassins and some of them work for the Dark Brotherhood.

After leaving Coldharbour, the character will awake at Davon's Watch.