From TESO Wiki
Jump to: navigation, search
This article is a stub. You can help TESO Wiki by expanding it.

Bleakrock Isle is a small, barren island south of Solstheim. It is part of the Ebonheart Pact. This was the starting point for the player after the character generation and the tutorial in the beta. Now a boat will bring the player to the island from the new arrival point Davon's Watch. 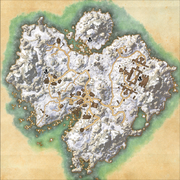 There are 3 skyshards scattered around the Bleakrock Isle.

With special thanks to Garkin, who created the SkyShards v0.7 add-on!

Characters found on the Island